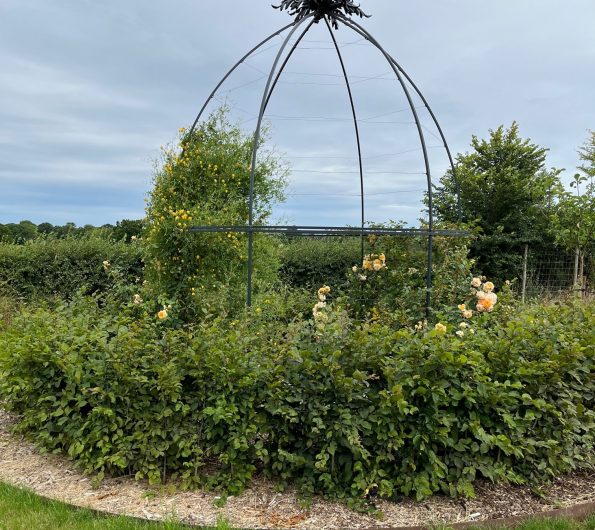 Our New Garden – one year on!

Our new garden, like almost all gardens, is a mix of delight and disappointment. The delight comes from the new trees, mostly doing well and the grass gardens, which survive the wind and drought well, and look wonderful.

The disappointment is multifold. Wind preventing us sunning on the terrace, blowing the beams of the pergola down,  drying the leaves of newly planted shrubs, cracking the trunk of young silver birches; birds scorning the dozens of bird boxes loving erected for them, even though they were put by an expert who stipulated they face the right way and are of different sizes and designs to suit small birds, owls, and kestrels. So far I have only seen squirrels in the kestrels ’and crows in the owl box. I would cheerfully murder the crows. There are thousands of them – I guess that’s what keeps the other birds away, and in the early morning they bang on our windows and wake us up. I think when the rising sun shines on the glass they see their reflections and think they are looking at rival crows which they then attack. They keep this up for an hour or so, poo-ing prodigiously on the windowsills and parapet. 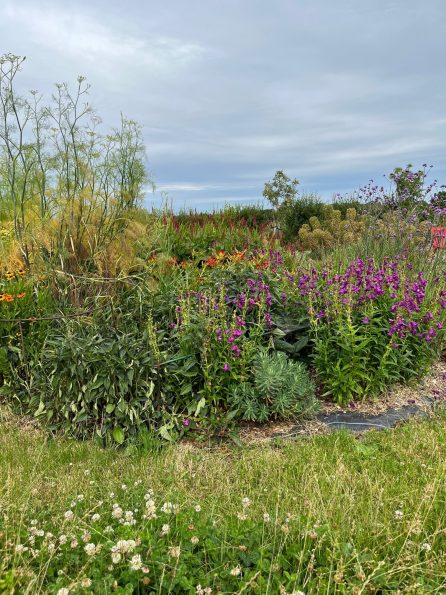 But the biggest disappointment has been the mis-named wild flower meadow. I spent an hour removing the seedheads from a million docks in it today. Going organic is all very well. Only the docks, nettles and thistles just love it. I don’t mind a few nettles, which are good for butterflies, and I like some thistles but not others – definitely not the large invasive Musk thistle. But I can’t think of a good thing to say about docks. Even my long-held belief that rubbing a leaf on a nettle sting would make the itch go away turns out to be an old wives’ tale. Docks have roots so deep you can’t pull them up and they breed like rabbits – every branch has millions of seeds. The temptation to spray the blighters with a dose of Round up is strong, but we are trying to be on the side of the good guys, so I’m trying to stop them spreading by removing their seeds before they fall.

I thought it would be a ten-minute job, but the colour of the half-ripened seeds and leaves at this time of year is a rusty brown, and it’s hard to tell from a distance if you are looking at docks or yellow rattle. In my book yellow rattle is the absolute star of wild flowers. In our patch it’s almost the only one that has appeared at all, and it has done brilliantly. It has a  pretty lemon yellow flower and, best of all, it discourages grass by feeding on its roots. And as grass is the enemy of most wild flowers, smothering them with too vigorous growth, yellow rattle is my hero. 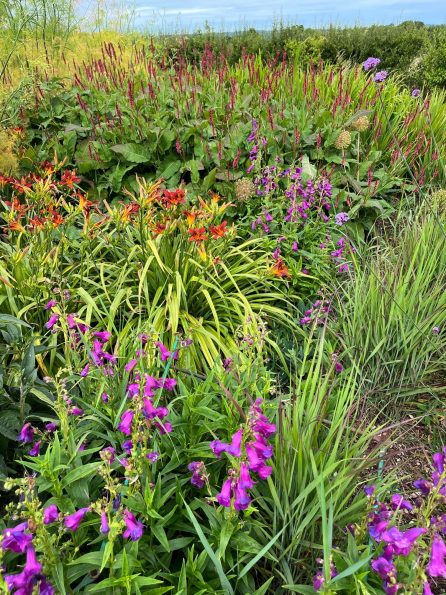 Anyone who saw Prue’s Great Garden Plot on Channel 4, will know that in our old age John and I have taken on a massive task: turning a concrete farmyard and two scrubby fields, into a garden. As I’m getting rather past a lot of the labour the garden demands, I’m just grateful John is still active and we have two days of Philippa, Ratty and Martyn. Philippa is a knowledgeable and dedicated ex-florist, who does the planting and caring, while Ratty and Martyn do the heavy lifting.  I tend to drift about like Lady Muck, picking sweet-peas from the troughs, standing about with a hose, or dead-heading roses. Or savaging the docks. 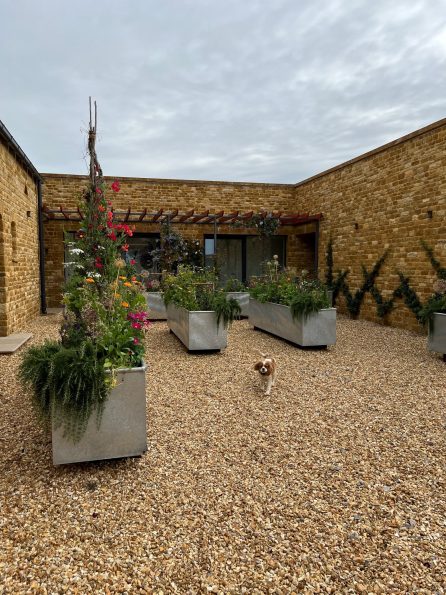 And I  don’t know anything better than sitting with, glass in hand, on the terrace on a summer’s evening, and gazing at the garden. Unless it’s forcing our friends to  tour every inch of it, telling us how lovely it is.

‘I  don’t know anything better than sitting with, glass in hand, on the terrace on a summer’s evening, and gazing at the garden. Unless it’s forcing our friends to  tour every inch of it, telling us how lovely it is. ’