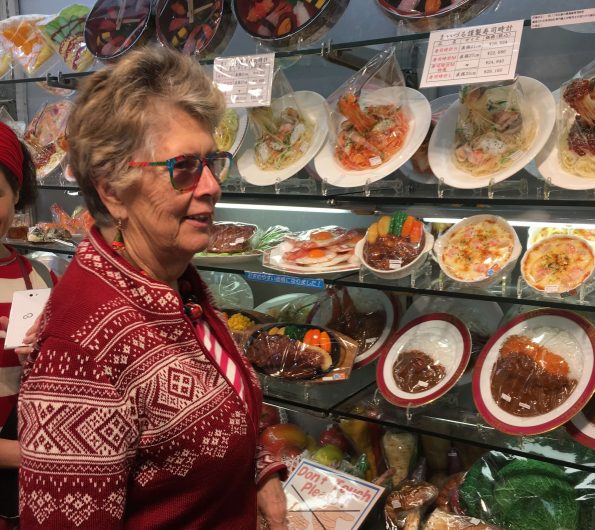 Japan- the experience of a lifetime

For fifty years I’ve thought about visiting Japan, but never quite dared to go to a country so different, where less that 3% of the population of Tokyo are foreigners of any kind, and very few of them Europeans, where there are few signs in English and almost no one speaks it. But that, I discovered, is the attraction.

Yes, you commit faux pas (crossing your chopsticks, forgetting to remove your shoes, failing to bow from the waist) but the Japanese, drilled from birth in ultra-politeness, just smile and forgive. In three weeks, we never heard an altercation, never saw unruly children, were never met with anything but a smiling effort to help.

The Japanese characteristics that struck me most forcibly were their politeness, their conformity, their cleanliness, their interest in food, and their delight in kitch.

Japan must be the cleanest country on earth. Their famous loos, spotless even in the dingiest basement bar, offer you a choice of bidet-like washes (front bottom or back bottom as my grandchildren would say) a drying option and music of your choice to mask any embarrassing sounds. The streets are completely litter free. No, I lie, we once saw a plastic folder blowing about in the wind. And then someone, presumably its owner, pursued and caught it.

While gazing at the skyscrapers jammed into any available space, the tiny wooden houses sometimes surviving between them and the multi-story flyovers carrying trains as well as cars,  we’d find ourselves trying to spot a scrap of paper or a discarded coffee cup. Tokyo is one of the biggest cities on earth, the Japanese double-wrap everything, and yet there’s no litter.  No litter bins either, everyone takes their rubbish home and wraps it in tidy bundles for the daily refuse collection.

All this is about discipline, I guess, and conforming to the rules. We quickly learnt that not sticking out, not drawing attention to yourself is the correct thing to do. God knows what they thought of my enthusiasm for colour and over-the-top earrings and necklaces – they were far too polite to stare or comment.

Japanese women are almost all elegant, in sombre clothes but stylishly cut. School children wear identical, perfectly tailored and clean black uniforms with crisp white shirts and carry black leather satchels. No ‘individualising’ as our teenagers do, hoiking up skirts, pulling down ties and lurid trainers. Nursery-school children are more brightly coloured, with identical caps.  No shouting, no crying, just the occasional skip of excitement and lots of smiling.

And so to food. In a staggeringly beautiful country that is 2000 miles long from the freezing North to the tropical south, consisting of island mountains jutting out of the sea, with only growing space (the valley floors) about the size of Wales, and with a population of 127million, I guess it follows that they should eat fish for breakfast, lunch and dinner.

I’d done a good bit of reading about Japanese food, and knew about their regional specialities, (ramen and yakatori in Fukuoka; sushi in Hokkaido; udon in Takamatsu; Japan’s vodka, sochu, in Kagoshima;) but I didn’t know what dedicated eaters the Japanese are.

Everyone eats out or buys takeaways all the time, partly I guess because in the big cities houses are too small to waste space on kitchens. Under Shibuya station there is a supermarket about the size of our biggest Tescos, entirely devoted to takeaway food or ready-prepared dishes for microwave, tepan (hot-plate grill) or for the national lunch-box, the Bento. Counter after counter of seafood, yakatori (twenty variations of chicken-on-a-skewer), ready-dressed salads, hot soups, and the ubiquitousonigiri, cooked and flavoured rice packed in a pyramid shape and wrapped in seaweed. 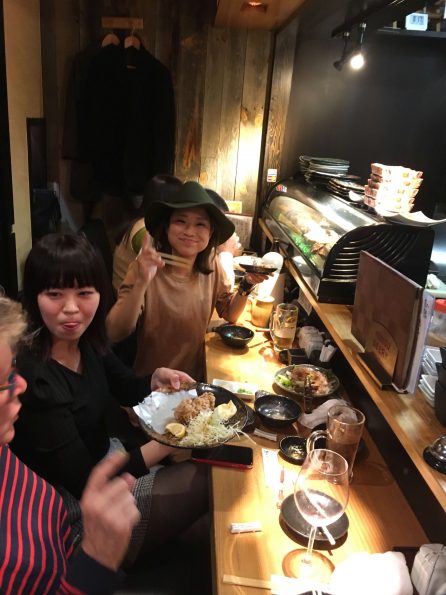 At breakfast I followed a Japanese businessman round the buffet and picked up whatever he picked up. I think(can’t be sure) that what I had included mini-mouthfuls of tofu, chicken, anchovies, mackerel, salmon eggs, pickled veg, omelette, rice porridge with spring onion, miso soup, and a soya junket. All in all, they amounted to a dozen mouthfuls, mostly protein. A dozen different flavours, made homogenous (if you liked) with soy sauce and chilli flakes. 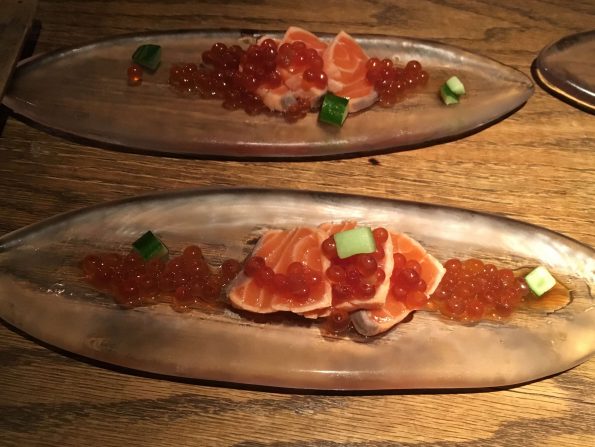 Once we splashed out on the Michelin-starred restaurant, Umi, in Tokyo. Like most good Japanese eateries, it is tiny, seating only ten people. We had to book through our hotel. (Few top restaurants accept bookings from tourists who have a reputation for not turning up. The Japanese regard this, rightly, as unconscionable rudeness.) We pushed into a tiny room, to be greeted by a barrage of barked shouts. Really scary, but effusive smiles and bows took the aggression out of the greeting. We sat at a counter overlooking the kitchen counter watching the master prepare a succession of twenty-five sushi, all different. accompanied by occasional barked commands to his staff, who replied with equally loud one-word shouts. Disconcerting, but we got used to it. Once most smart restaurants behaved like this, with the customers silent, giving due attention to the food.

We ate in small cafes, in stations, in guesthouses, in the street, on the bullet train (beautiful bento boxes) and only once did we feel over-fed and uncomfortable. We’d been to Mojiko, a fifties style seaside resort where we ate the local oversized dish of curry and rice baked with cheese on top. It felt very Western, heavy and calorific, and then we made the mistake of trying the bakery products on sale at Fukuoko station. One was delicious, worthy of a GBBO technical challenge if I could only work out how they make it: a deep-fried doughnut-like oval with crisp and crumbly panko crumbs on the outside and a whole soft-boiled egg surrounded by curry sauce inside.    Well of course we felt stuffed. The Japanese would never be so undisciplined as to eat all that. 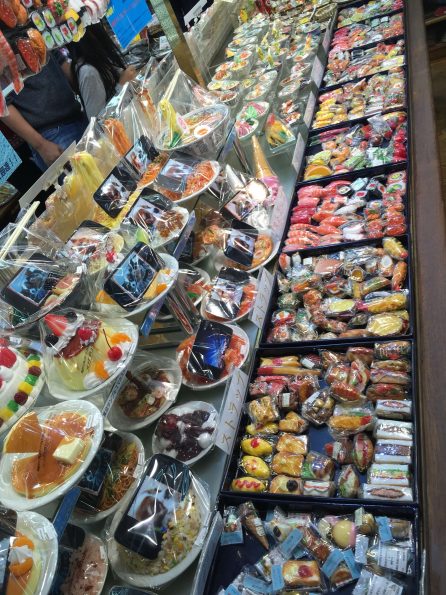 Finally, the Japanese love of the cute and kitch: Everywhere, in street markets, shopping malls or department stores there are rows of machines selling Manga characters housed in plastic balls like a Kinder Egg or hanging in serried ranks or piled by the hundred in tubs. Tiny kittens, pandas, monkeys, story characters like the tele-tubbies or Princess Ella are bought by everyone. Every enterprise, even government museums, has its own character-figure, prancing in costume outside the building and for sale in miniature inside; printed on tee shirts; dangling from keyrings; as a cuddly toy.

There are Hello Kitty clubs, stores and cafes selling decorated mini-cakes so sweet they make your teeth jump. There are even cat cafes where you watch real cats eat. When you think of the classic minimalist good taste of a traditional Japanese house, like the Kanazawa-jo one in the Kenroku-en gardens of Kanazawa with its exquisite silk paintings of a single cherry branch with one bird, a few chrysanthemums or grasses set against an expanse of empty space, the filtered light through paper screens with dark wood frames, pale tatami mats on the floor, ordered Japanese gardens, you cannot believe all this junk belongs to the same nation.

Japan is a mass of contradictions. Politeness, discipline and conformity, set against a love of violence and cruelty in film and fantasy; daytime control giving way to extreme, almost compulsory drunkenness for the salarymen at night; at one extreme, exquisite design in leather and paper goods; beautifully crafted chefs’ knives; Issey Miyaki’s architectural shapes and fine pleating, and on the other, big-eyed girly drawings and sickly sentimental toys.