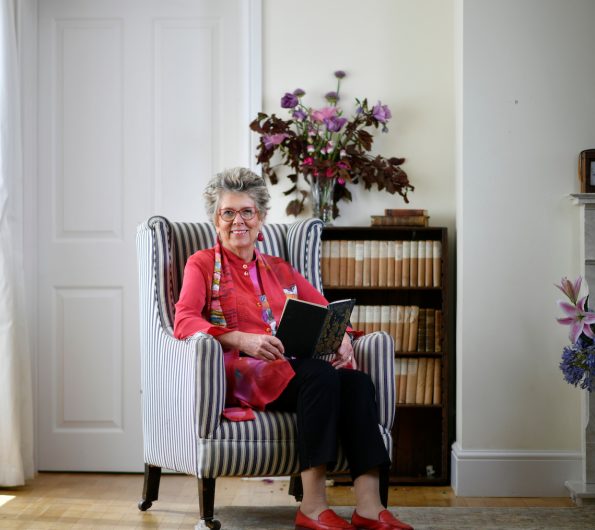 Christmas in our family seems to guarantee tears and tantrums as well as jingle bells and jollity.

Indeed, in my childhood, “feeling Christmassy” meant feeling thoroughly over-wrought or bad tempered, the antithesis of the ‘Christmas Spirit’. I think my father invented it when my mother, who was a terrible cook, spent all day making marmalade to give as Christmas presents and was then beside herself with anger when she burnt the lot.

My earliest Christmas disaster was my first attempt at cake icing. I’d proudly come home from school with a Christmas cake. It was covered with smooth royal icing on which I’d painted the Three Kings but I’d omitted the teaspoon of glycerine in the icing which would have prevented it drying to concrete. My Dad broke my mother’s ivory-handled knife on it. He was using it as a chisel and hitting it with a hammer. The handle split but the icing did not. We turned the whole thing over and scooped out the cake and marzipan.

When I left home and had my own flat, I set fire to the Christmas tree. I had had the bright, but it turned out dangerous, idea of spraying the branches with hairspray to top the needles falling. In those days we had real little candles on metal holders that clipped precariously to the branches. One tipped over and the hairspray and home-made paper decorations ensured the tree’s rapid incineration, buckets of water, a sodden carpet and me feeling distinctly ‘Christmassy’.

Everyone has nightmares of the turkey ending up on the floor. Well, I’ve been there, but no one saw, and I just picked it up and carried on. I mean, what would you do, with a dozen people waiting to be fed? I have even yanked a whole ham out of the jaws of a visiting Great Dane, given it a good wash under the cold tap and said not a word. Nobody died.

My scariest Christmas moment was when I’d half-heard some radio advice about boiling chestnuts to make peeling them easier, and decided deep-frying them would be quicker. It didn’t occur to me that the chestnuts inside their tight jackets would swell and burst out of the skins, which would be hardened by frying, as opposed to softened by boiling. Exploding chestnuts with boiling fat raining down meant I couldn’t get near the fryer to turn it off. I managed it by creeping along under my husband’s overcoat. Which made him pretty Christmassy.

The worst Christmas dinner I ever cooked, or failed to cook, was to have been two slow-cooked joints of pork for twenty five of us. I put them in a low oven at 8 am, safe in the knowledge that I need not even look at them for at least five hours.

At 1 pm I opened the oven. Stone cold. Pork joints sitting there, cold to the touch, raw. My young nephew had made himself a fry-up, and nicely-brought up lad that he is, had wiped down the cooker and left everything switched off. My brother and I hacked up one of the raw joints into slices and fried them.  Not great, but lunch was very merry with a lot of laughing and ribbing me, the professional cook. That afternoon I cooked the second joint, very slowly, thinking it would be good, cold, for Boxing Day. I took it out of the oven sometime after supper, looking and smelling like heaven. I Ieft it cooling in the kitchen. Next morning, I came down to five stripped pork ribs, the late-night card-playing young having demolished it. Every time one of them came into the kitchen for a drink or more ice or something, they’d pull a wee bit off, and then a wee bit more. Feeling extremely Christmassy, I was only slightly mollified to hear it was the best roast pork they’d ever eaten.

One of our merriest Christmases was when both my and my brother’s children were small enough to be tucked up in bed on Christmas Eve and the adults sat down to supper. My husband was devoted to Prunes and Custard and I thought a festive version would be both amusing and delicious, so instead of boiling brick-hard prunes in water as I used to for breakfast, I soaked squashy ready-to-eat ones in port, which was gradually absorbed by the prunes. What I hadn’t realised, is that, as I’d omitted the boiling, the port had lost none on its alcohol. We’d had a few glasses of fizz, some good red wine with dinner and then eaten almost all the prunes, which meant almost a quarter-bottle of port each. To start the Christmas celebrations with an almighty hangover is maybe not advisable.

My mother Peggy was thrifty and would sometimes re-gift Christmas presents to the original donor by mistake. But her funniest offence was to pass on a horrible clutch of egg-shaped soaps in a twee little nest of coloured paper straw with a note to me (we’d just moved house with our two toddlers) “Hoping your new nest is safe and happy darling. Mum.” Lifting out the soap, I found another note, “Dear Peggy, Hoping your new nest is safe and happy darling, Love Sheila.”  It was dated the year before when my mama had arrived in London. She was as characteristically unrepentant about recycling the message as she was about the present.

Most of my memories of Christmas are funny: my Mama insisting we all watch the Queen’s speech, and then snoring gently right through it; A Nativity play when our pet donkey ate the straw in the manger, including the corn-dolly Jesus. A big hairy grown-up’s arm bearing a cardboard Star rising out of the improvised stage curtain to encourage the diminutive three kings to get on with it. But my favourite memory was of a trip to London for the annual panto treat. We worried that our four-year olds might be too young for The Sound of Music, but all was well until the quietest most tear-jerking pause had the whole audience in suspense. Then my son’s clear-as-a-bell voice rang out, filling the auditorium with a long-drawn out whine: “Can we switch it off now, Mum?’

‘Christmas Cheer. Or not. First published by the Spectator, November 2018,  ’