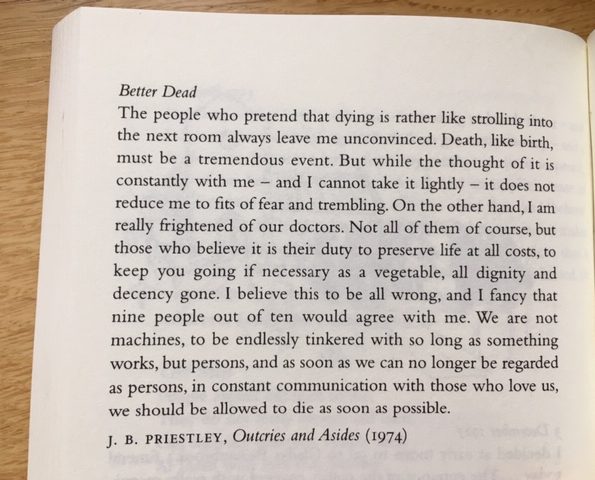 The older I get and the more I see, the more I think that J.B.Priestley got it right in his Better Dead article in 1974.

”The People who pretend that dying is rather like strolling into the next room always leave me unconvinced.  Death, like birth, must be tremendous event.  But while the thought of this is constantly with me- and I cannot take it lightly- it does not reduce me to fits of fear and trembling.  On the other hand, I am really frightened of our doctors.  Not all of them of course, but those who believe it is their duty to preserve life at all costs, to keep you going if necessary as a vegetable, all dignity and decency gone.  I believe this to be all wrong, and I fancy that none out of ten would agree with me. We are not machines, to be endlessly tinkered with so long as something works, but persons, and as soon as we can no longer be regarded as persons, in constant communication with those who love us, we should be allowed to die as soon as possible”.

Having watched my brother die a terrible death I am passionate that each individual should have the right to decide how they die.

It appears I am not alone in this view. A recent You Gov poll conducted on behalf of Dignity in Dying has found that 67%  of Conservative Party members want to see a change in the law to allow terminally ill, mentally competent adults to choose the manner of the timing of their own death.  Just 20% oppose a change in the law.

Assisted dying has been hailed as the next great liberal reform….let’s stop talking and do something to make a difference to people suffering needlessly today.