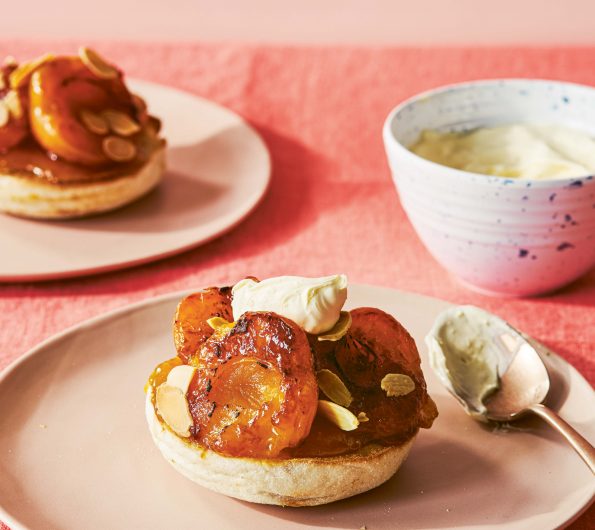 This is the most divine, indulgent and irresistible pud. Don’t skimp on the cream or jam. Better forgo it altogether than try to make it healthy! It’s best made with ripe fresh apricots. If using canned fruit, roast them anyway – it will deepen their flavour.

40g butter, half of it melted

Get the grill as hot as possible.

Halve the apricots, remove the stones and put the halves, stoned side up, on a grill tray. Brush them with the melted butter and sprinkle with the sugar.

Grill, not too close to the elements or gas flame, for 8–10 minutes until brown round the edges.

Meanwhile, butter the toasted muffin halves and put them on warm plates. Spread them with apricot jam and share the apricot halves between them.

Sprinkle with the almonds and serve with clotted cream.

You can toast the flaked almonds in the oven under the grill tray at the same time as roasting the apricots, but they burn in a flash, so be careful. Safer, probably, to stand over them while you gently turn them in a frying pan, or toast for 3 minutes in the microwave, giving them a stir halfway.